One Day in Split 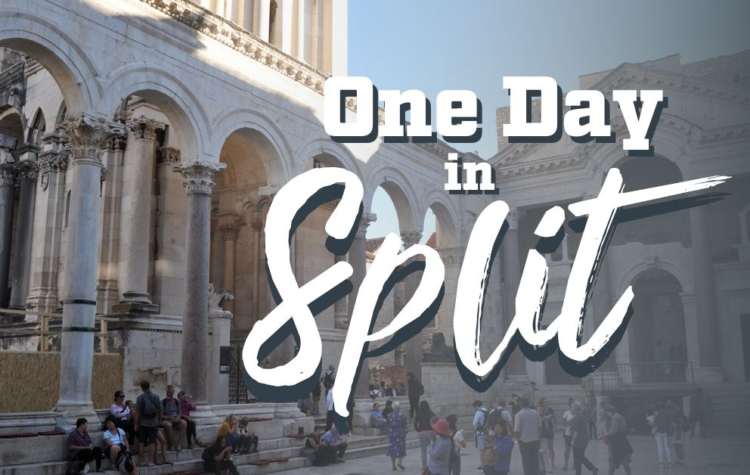 Split is known as the soul of Dalmatia, but is often overshadowed by bigger and flashier Dubrovnik. We will show you why you shouldn’t disregard this beautiful and vibrant city when planning your next trip to Croatia!

Join us as we show you… One day in Split! 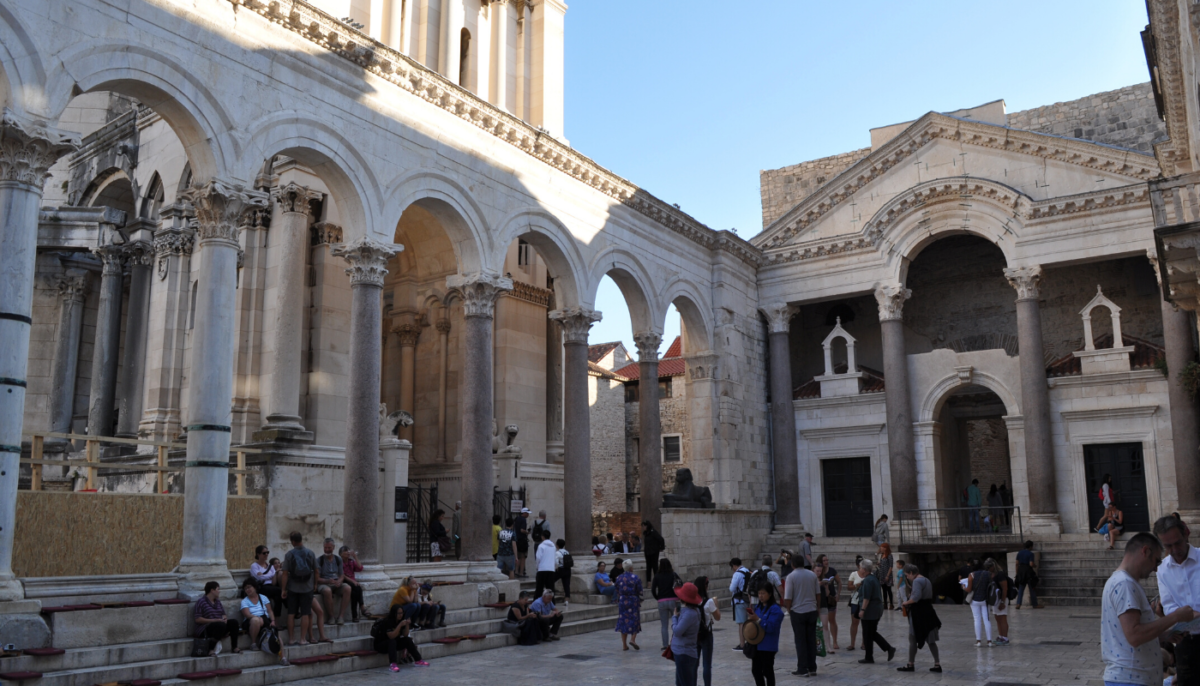 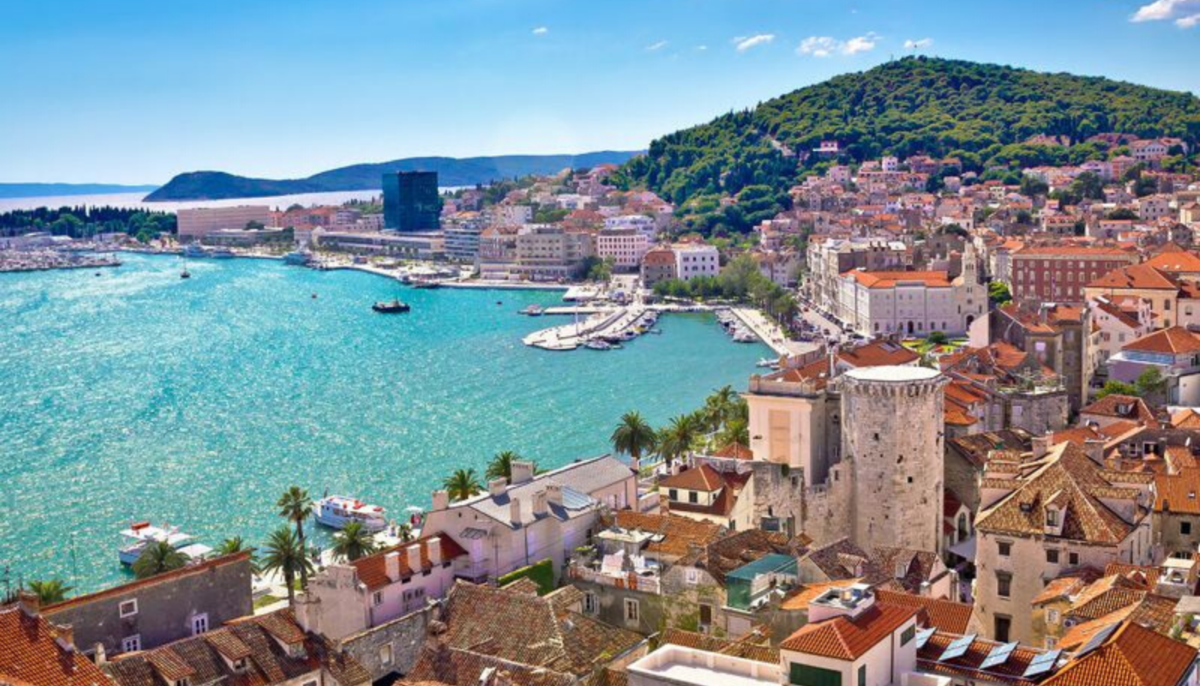 Arriving into Split, soak up the sights and smells around you. Antique streets and pagan temples, medieval churches and the charm of the fisherman’s quay. You will feel transported back in time, way back to the Roman Empire – Split was founded by the Romans in the 3rd century. Take a moment to imagine how it may have been to arrive by boat into this picturesque port!

Many ancient Roman buildings still remain to this day – enter the city through the 1700 year old Bronze Gate, built into the city walls as a main point of defense for the city and the grandiose Diocletian’s palace. 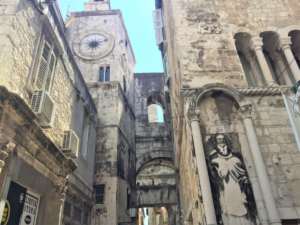 Built for the Emperor Diocletian, this impressive structure is more like a fortress, and makes up over half of Split’s Old Town with its cobbled streets and ancient buildings.

We walk through the ancient streets of this castle fortress, today included on the UNESCO World Heritage List. We walk past ancient Roman mosaics, under long standing arches and through narrow winding streets. Though parts of this place were indeed a palace, other parts were residences for the emperor’s garrison. We see where the garrisons would have lived in tall rickety buildings, with small shuttered windows and balconies. The ancient past meets modernity here – today people actually live within these walls! We’ll wander the rooms and courtyards of the beautiful palace – the imperial summer veranda and impressive reception area. 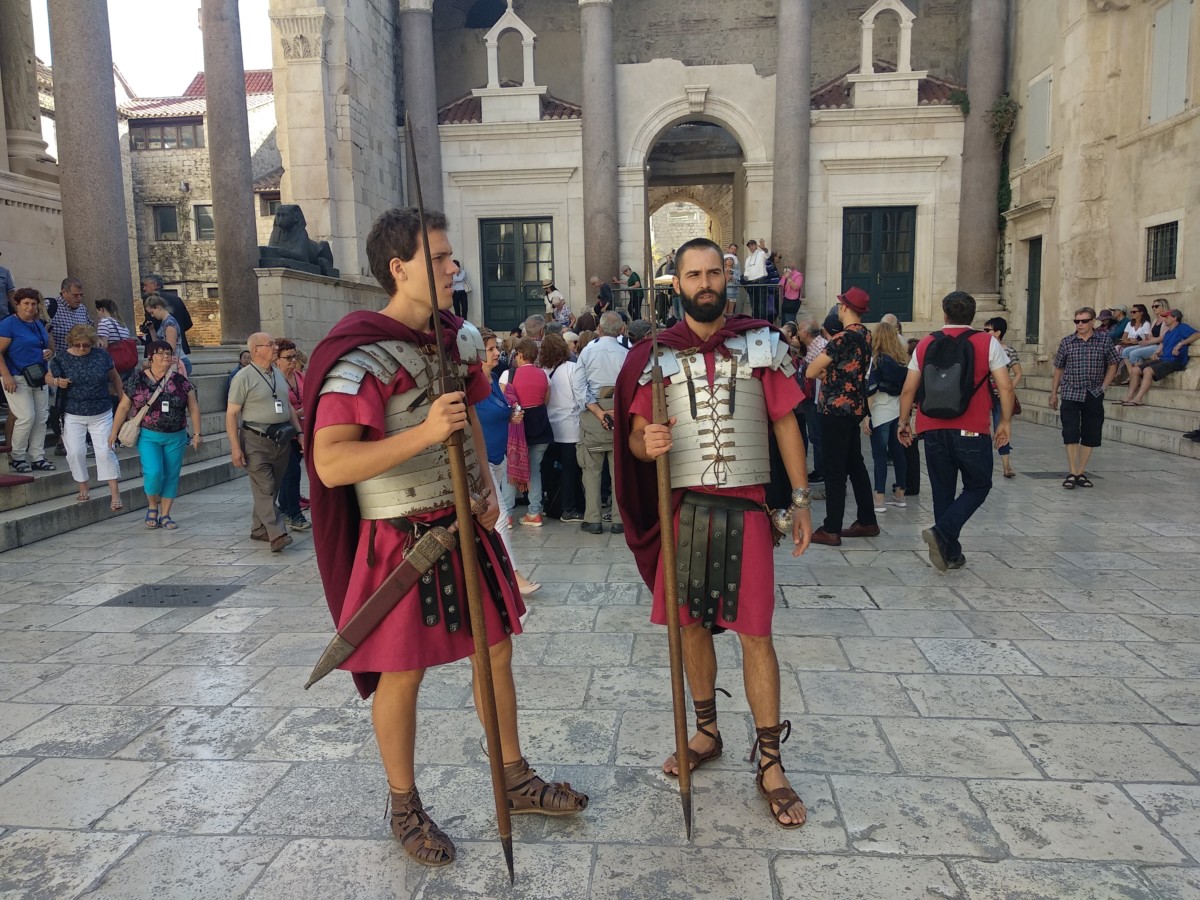 Be drawn by the sound of singing voices into the Vestibule, and impressive circular hall with a tall domed roof. Built as a grand meeting hall for the esteemed guests of the emperor, today, the dome opens up to the sky, and Dalmatian A Capella Klapa groups sing here in the summer months due to its great acoustics. 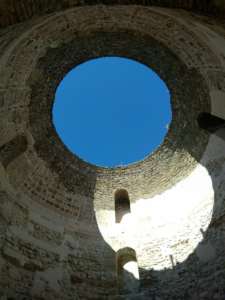 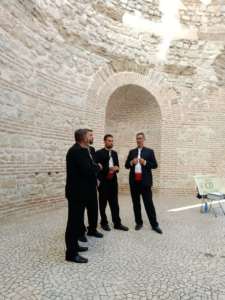 “Klapa” literally means “a group of friends”. Native to this area of Dalmatia, this unique style of singing is usually performed by small groups, who sing about many Croatian motifs, such as wine, the sea and their homeland.
Pause to listen to the melodic tunes echoing in this ancient palace.

Walking out into the Peristil Square, the grand heart of the Diocletian’s Palace, you could almost overlook a statue stood on the wall…. …Is that a sphinx?! Yep! It’s a sphinx! And it’s an impressive 3500 years old!
But what is it doing in Split? And how did it get there?! 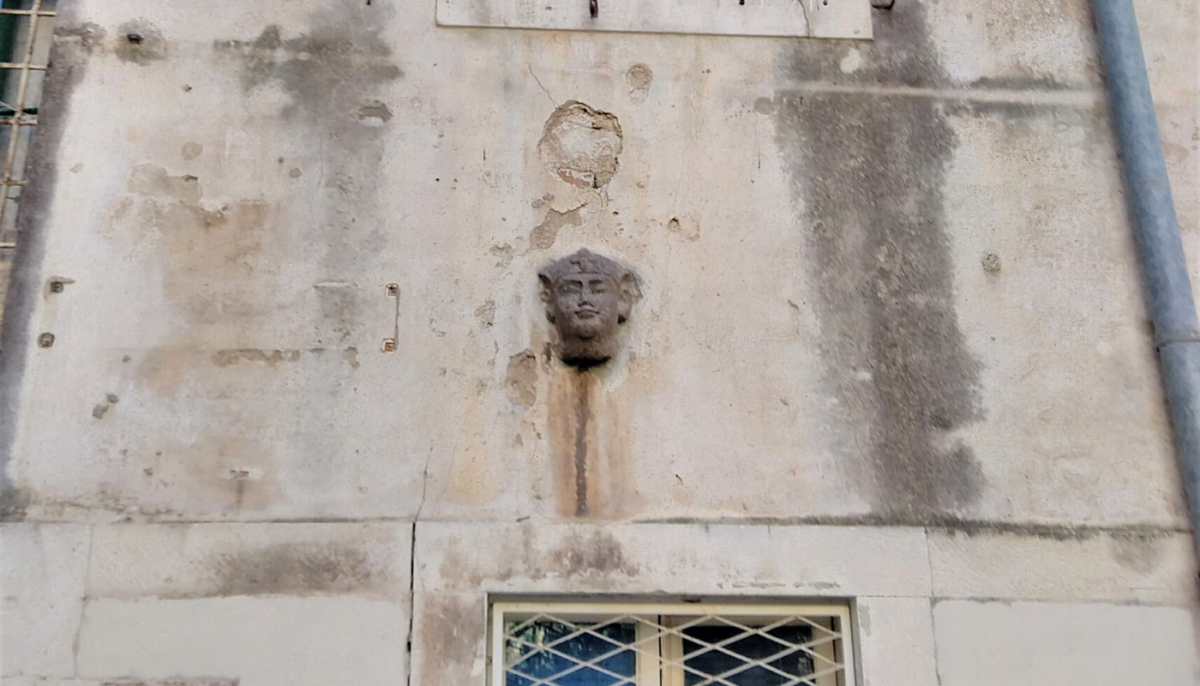 The Roman Emperor Diocletian – founder of Split, wanted to prove himself as belonging to divine rulers and gods, much like the pharaohs, so he brought TWELVE sphinxes from Egypt to Croatia. The sphinxes of Split are an incredible example of Egyptian engineering, and Roman determination to transport them so far, just as a status symbol!

Continuing on, you see a tall tower casting a shadow onto the square, and wander into a church.

The Cathedral of Saint Domnius was consecrated in the 7th century AD is thought to be the oldest Catholic cathedral in the world, that remains in use! The structure was originally built in 305 AD as the Roman Emperor Diocletian’s Mausoleum, but was later converted into a cathedral – ironic, as Diocletian was a famous persecutor of Christians! 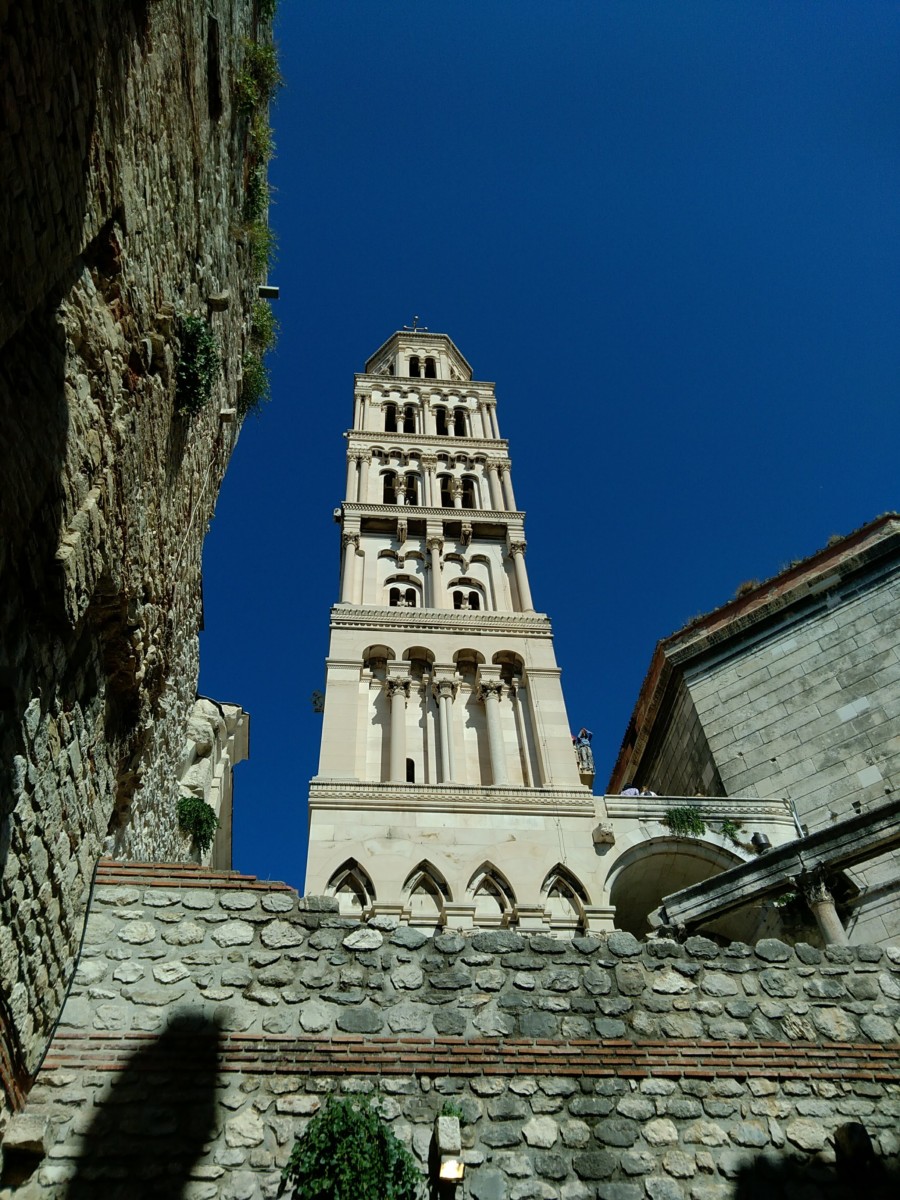 Notice its unique octagonal shape, incredible carved doors and a mix of Roman and Christian symbols. 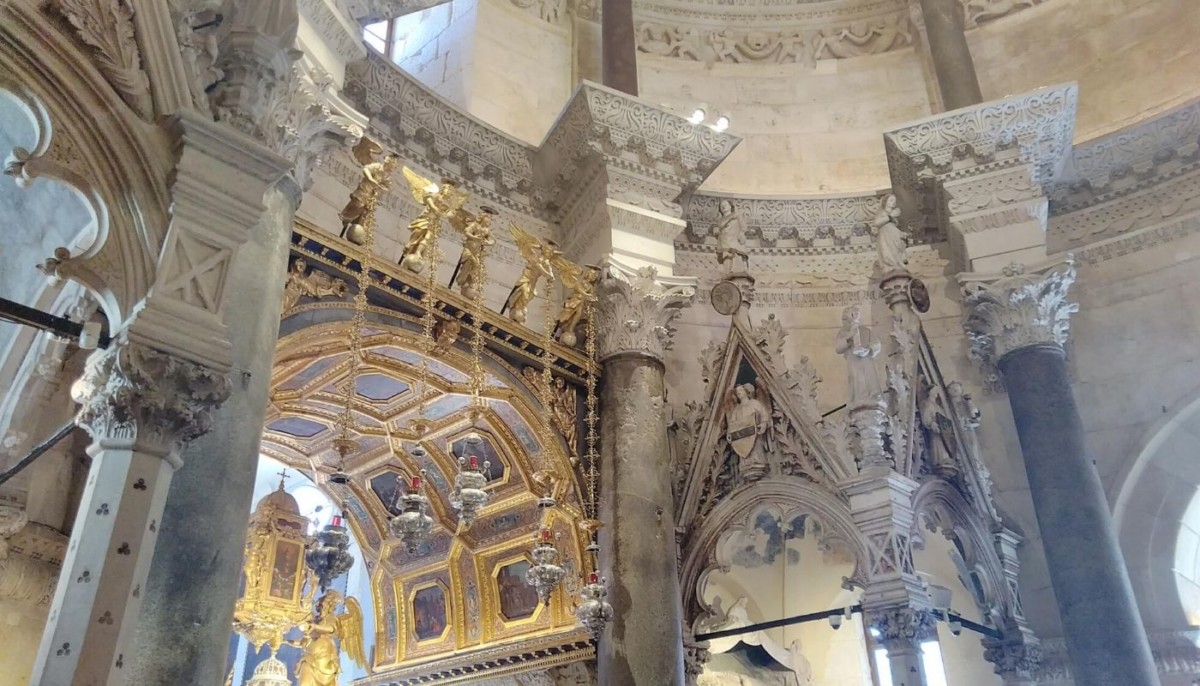 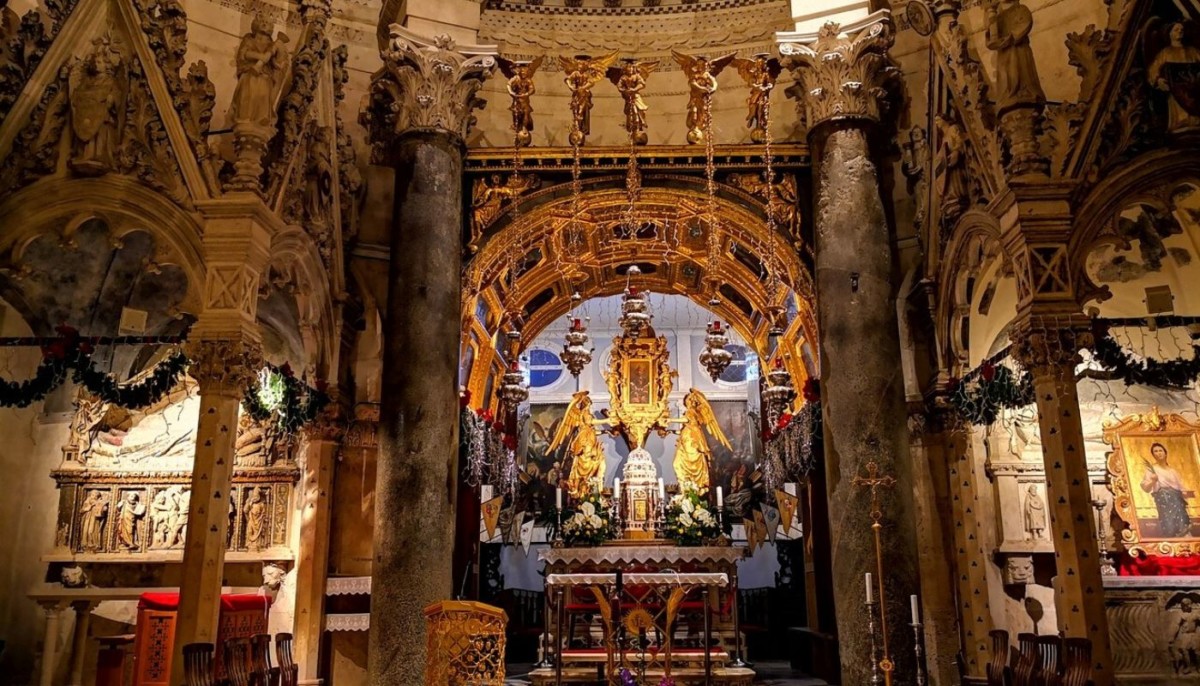 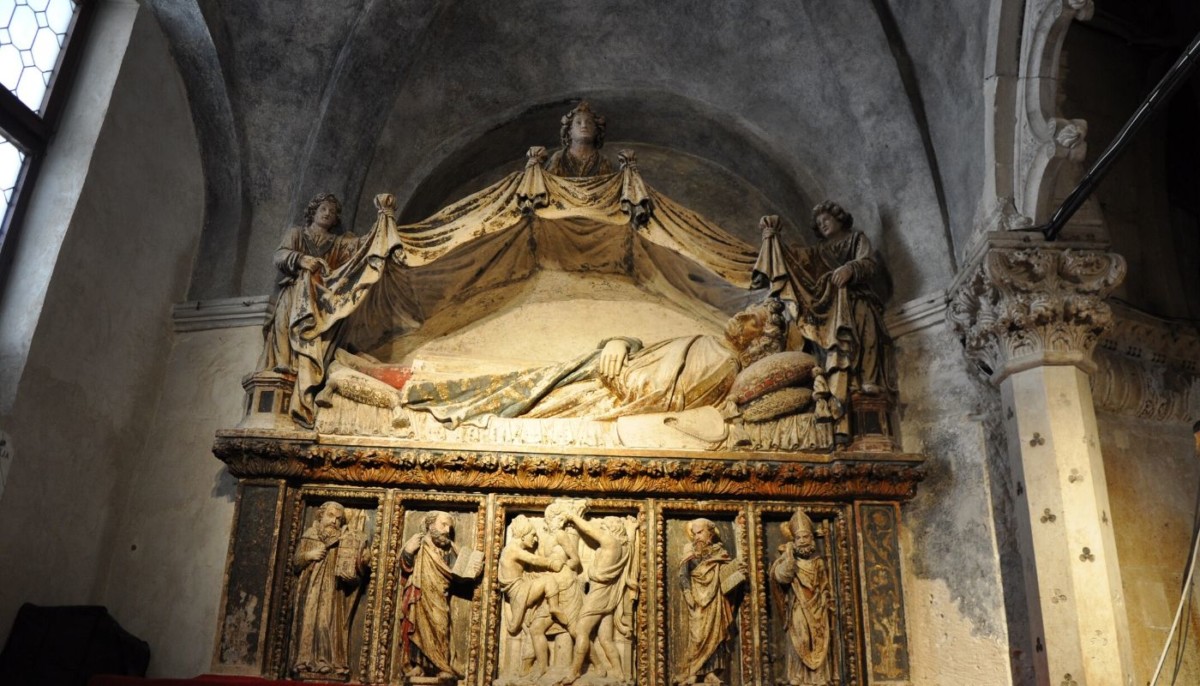 The altar, in the northern niche, with St Domnius’s remains from the Bonino’s altar, was built by the Venetian sculptor Morlaiter in 1767, and it is rumored that it was made of the stone from the emperor’s tomb.
The impressive 57 meter-high bell tower of the Cathedral was constructed in 1100 AD, and you can climb it! But don’t worry, it was heavily reconstructed in 1908 – climb the steps all the way to the top to see the spectacular views of the entirety of Split!

Wander the cobblestone streets, and small quaint courtyards and wave to locals hanging off balconies.
Stop in one of the streetside cafes for some delicious seafood and local wine, while you people watch! 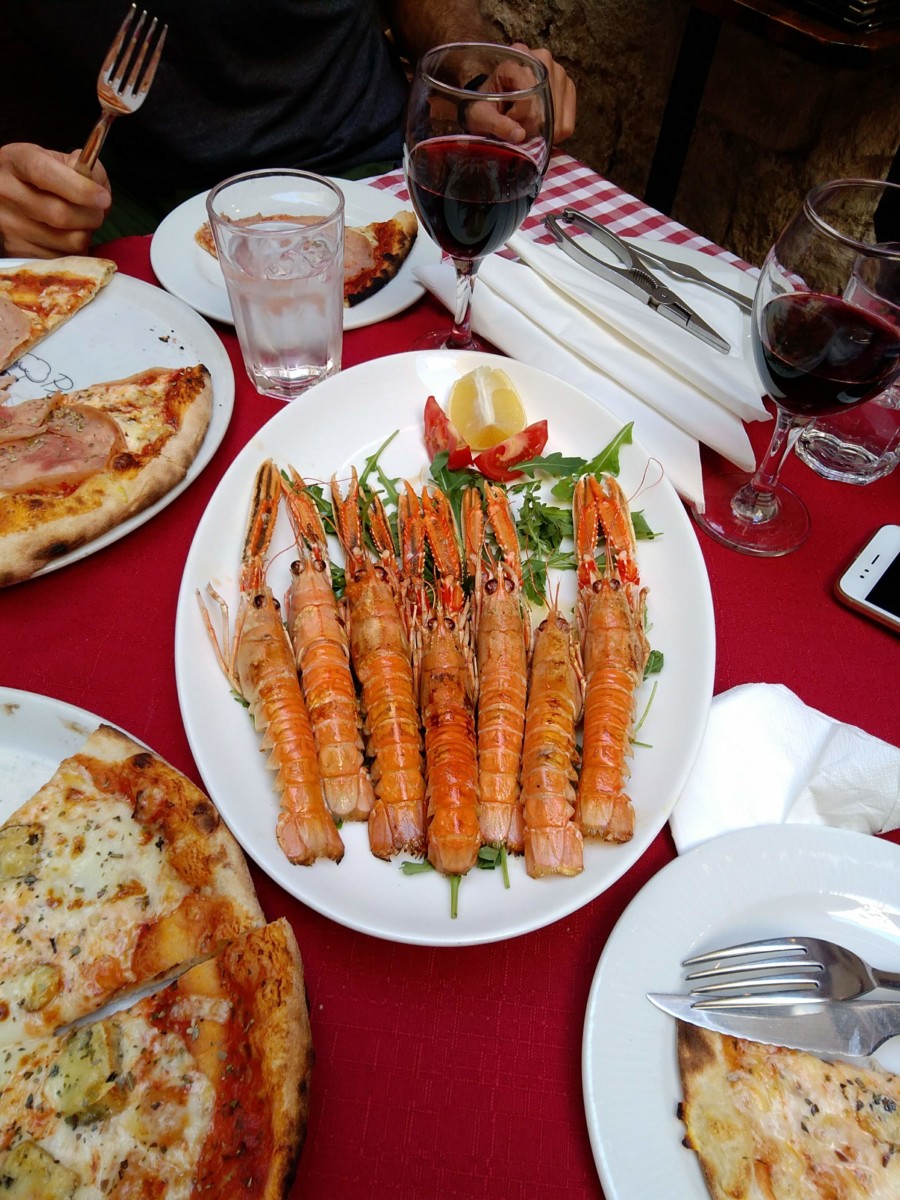 Next, retreat into the shade, taking a walk in the underground cellars of the palace – these high ceiling-ed rooms were used for storage, but today are home to a bustling market. Turn a corner to find a section preserved with a museum – huge cavernous rooms where Game of Thrones scenes have recently been filmed! 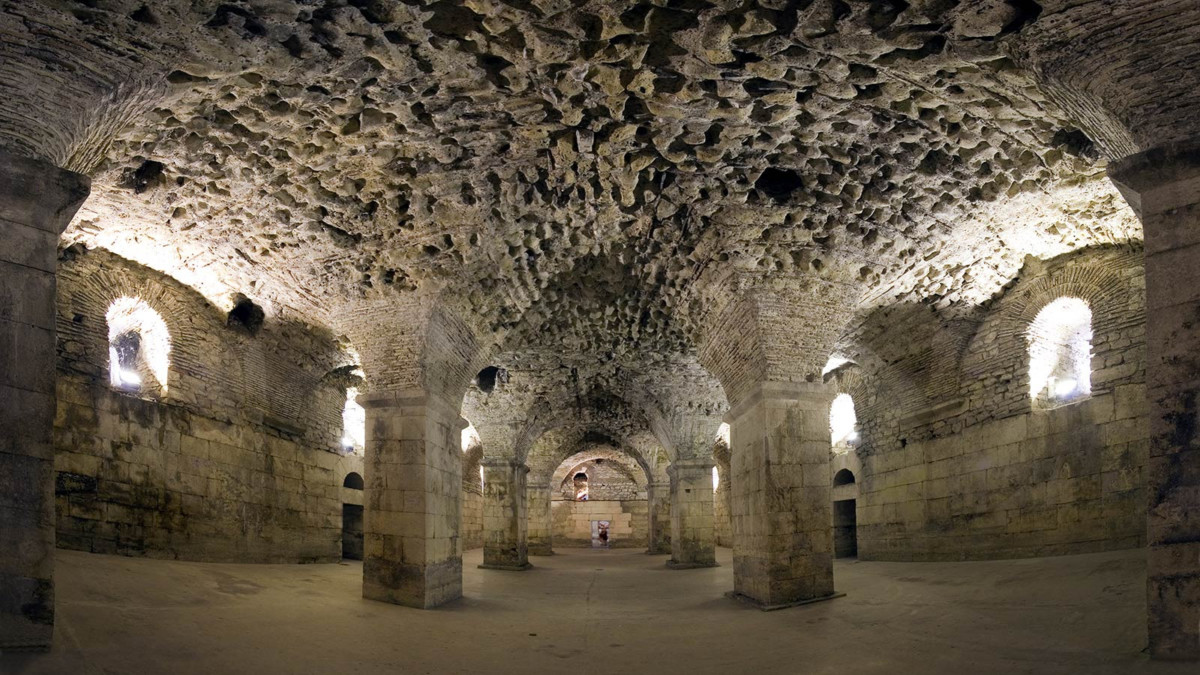 While exploring the maze of narrow streets, keep an eye out for Europe’s narrowest street. Pusti me proc, or Let Me Pass, is only wide enough for one person to pass at a time, hence its unusual name! Squeeze down this street and discover the unassuming Jupiter’s temple, built in the 3rd century AD – today it is the cathedral’s baptistery. Marvel at the ancient carvings of Roman gods, mismatched with the huge font in the centre of the temple, and Statue of St.John the Baptist, which replaced the statue of Jupiter. This temple is a good representation of the mix of cultures and religions which have passed through and had their influence on Split.

It`s just fascinating how walking around Split, you can find corners of antiquity in the courtyards of residential buildings; to really understand how Roman and Slavic cultures are closely intertwined. 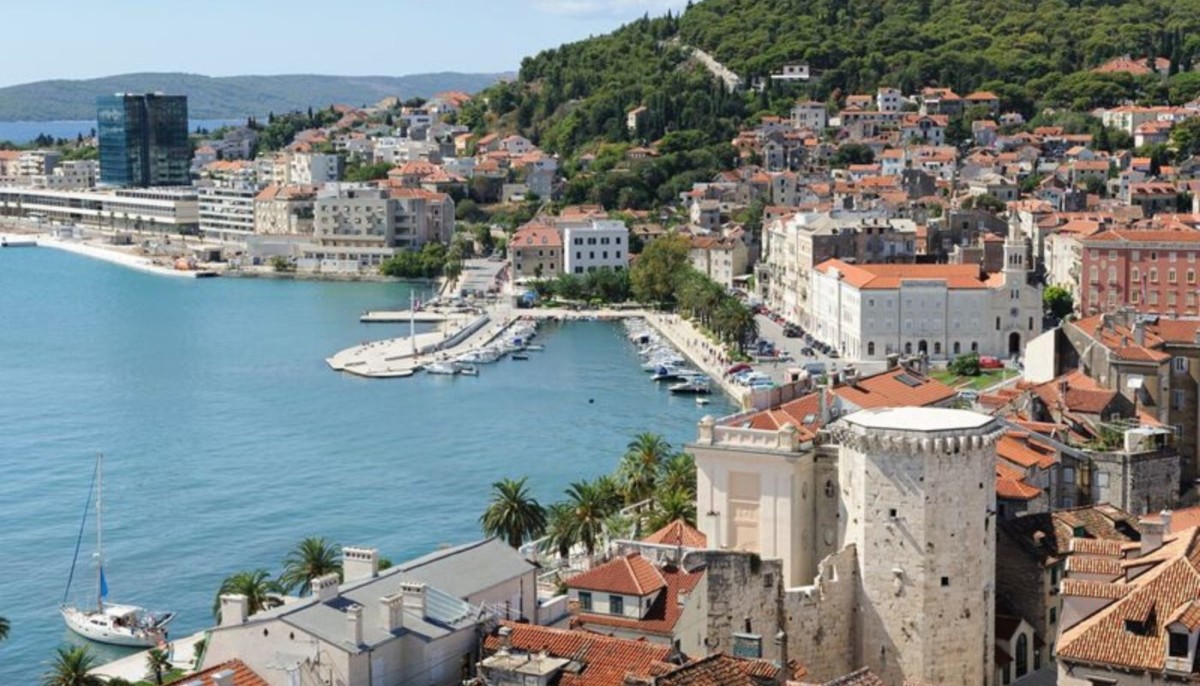 Round off day, sipping wine or grappa by the sea on the Riva – a perfect end to a perfect day.

Discover Split with us on our
Croatia – Hungary -Ukraine Tour. 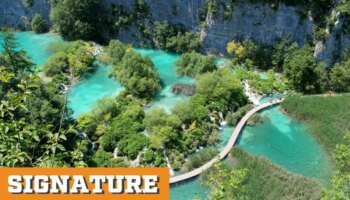 Taste the varied mix of cultures on the border cities of Eastern Europe. Whether it's stunning Croatian coastal cities, historical Hungarian castles, or a Ukrainian town influ.... 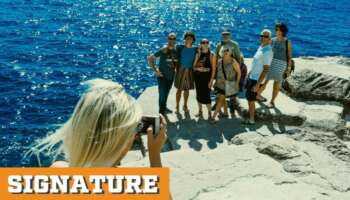 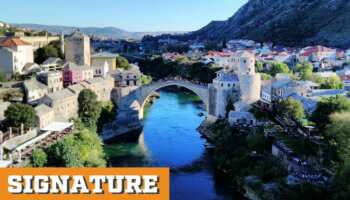